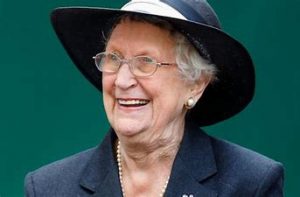 The Peckham Settlement is sad to record the death of Baroness Howe on 22 March 2022, its President for 50 years. She died of cancer at the age of 90.

In 1953 she married Geoffrey Howe, a young barrister who was intent on a political career in Parliament. He became a Conservative MP and finally was Chancellor of the Exchequer and then Secretary of State for Foreign Affairs. She pursued a career of her own in public service. Her forceful personality, her open mindedness and intellectual reasoning led to her being appointed to a number of important roles and gaining a reputation for being formidable. She was at her best as leader of a committee.

The Labour Government established the Equal Opportunities Commission in 1975 and she was appointed its Deputy Chair, which acknowledged her reputation in campaigning for women’s rights throughout her life. But her interests were far and wide. She especially supported, for instance, the education of the under 5s and the work for them in the Peckham Settlement, which was a pioneer in this field before World War 2. It was notable too that Elspeth Howe battled long and hard for married women to have their income taxed independently of their husband’s, which incredibly only came about in the Budget of 1988.

In 1983 she began a three year degree course at the London School of Economics. This helped equip her for subsequent appointments in the business world. She later became a Director of Legal & General, Kingfisher and United Biscuits. In 1992 she was appointed Chair of the Broadcasting Standards Council and typically sought more women to be appointed to top television jobs (a seemingly never ending task). The next year she was appointed President of UNICEF UK. Elspeth was a devoted Christian and that perhaps led to her appointment in 1994 by the Archbishop of Canterbury into Chairing a Commission into the administration and funding of our cathedrals in this country. But she never lost touch with social problems in a down to earth manner. In the 1970s and 1980s she chaired Inner London juvenile courts in Southwark and elsewhere. She continued to take an active interest in The Peckham Settlement throughout her life, attending meetings into her 80s; in 2011, as President of her school’s old girls association, she had taken a leading part in securing a gift of £200,000 to the Settlement.

In recognition of her lifetime’s activity to public service, in these and other ways too, she was first given a CBE in 1999 and then in 2001 Tony Blair appointed her to the House of Lords in the very first small group of People’s Peers. Her husband was already a peer for political services as a Conservative whereas she sat as an independent. This was a very rare situation where a husband and wife were separately awarded a peerage. They lived in Peckham and she stayed there after her husband’s death until a few years ago.

Baroness Howe may not have been in the public eye very much but she had an outstanding career and The Peckham Settlement is proud to have had her lifetime’s support.

This website uses cookies to improve your experience while you navigate through the website. Out of these, the cookies that are categorized as necessary are stored on your browser as they are essential for the working of basic functionalities of the website. We also use third-party cookies that help us analyze and understand how you use this website. These cookies will be stored in your browser only with your consent. You also have the option to opt-out of these cookies. But opting out of some of these cookies may affect your browsing experience.
Necessary Always Enabled
Necessary cookies are absolutely essential for the website to function properly. This category only includes cookies that ensures basic functionalities and security features of the website. These cookies do not store any personal information.
Non-necessary
Any cookies that may not be particularly necessary for the website to function and is used specifically to collect user personal data via analytics, ads, other embedded contents are termed as non-necessary cookies. It is mandatory to procure user consent prior to running these cookies on your website.
SAVE & ACCEPT